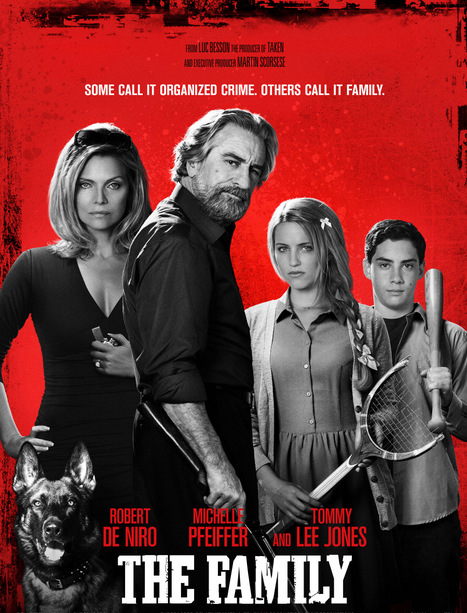 Several of my favorite movies (admittedly of the escapist kind, not necessarily the “Oh wow, what a great movie!” kind) have something to do with Luc Besson.  Leon, The Fifth Element, La Femme Nikita, and more.  For the last few years it seems like Besson was spending most of his time writing rather than directing.  When the trailer for this movie flashed on TV – in one of the rare times I was actually watching the commercials – I’ll admit that I got excited.  Quite excited.

I shouldn’t have gotten that excited.

Let’s start with the story first.  De Niro plays Giovanni Manzoni … I mean, De Niro plays Fred Blake, an ex-East Coast mafioso who has been moved to Normandy, France, under the witness protection program.  It’s not too long before we understand why – he sold out his family and placed Don Luchese in prison.  Old habits die hard with the Mazoni family.  Manzoni/Blake spends his time in town terrorizing a few local officials trying to figure out why his water is brown.  His wife (Pfeiffer) spends her time burning down local grocery stores.  His sons spends his time running a mob-like scam at school, while his sister spends her time lusting after the math tutor.  Oh, and they have to put up with the witness protection office (Jones) who is trying to keep them safe and is sick of moving them between cities.  Oh, and Manzoni is trying to write his memoirs on an old typewriter he found in the new house.

Oh, and the mob is trying to find them.  Enter Don Luchese.  The Don bides his time in prison, while his man on the outside travels the globe hunting down member of his former mob family to determine who sold him out.  All Luchese has is a fingerprint from some clearly stolen court documents, and matching it up is as simple as checking out the newly dead man’s finger.  Through a complete unbelievable sequence of events, Luchese finds out that Manzoni is hiding in Normandy and sends the entire crew out to get him.  Chaos ensures, and the poor town barely survives.

The movie failed because it should have stuck with one or the other of the two paragraphs above, instead of combining them. The concept of a dysfunctional mob family spending their time in witness protection is a decent idea, and with Besson behind the wheel it could have been extremely creative.  In fact, it started off great.  Watching the kids try to rule the roost at school while watching the parents completely fail at laying low was actually fantastic.  And then they went ahead and tried to tie the mob in.

The last half of the film is all about the mob trying to exact its revenge.  The portrayal of the mob crew is stereotypical in the best possible way.  The destruction of the town in their attempt to kill the Manzoni’s is a beautiful orchestration of violence.  The concept of how the family would bide their time in a town getting ready for the attempt at revenge would have been a decent idea.  The violence is fantastic.  But they had to mix it in with the family dealing with witness protection.

Granted, both ideas have been done, but that doesn’t mean that they can’t be done again by someone like Besson.  His touch is very much there, it’s just that the two halves of the story don’t jive well enough to make for a great movie.  They feel disconnected within the movie.  There seems to be no dread of retribution felt by the Manzoni family, even though they are making their presence pretty well known in the town.  The cuts back to Luchese in prison and a hitman trying to find the family feels jarring until the very end when the two finally come together.

Some may say that I gave far too much away in the description above, but I didn’t put any spoiler warnings up because I truly don’t think it spoils anything.  You learn as much in all the trailers… so I guess if you haven’t seen a trailer, SPOILER!

I’m disappointed in this movie.  It should have made up its mind about what kind of movie it would be instead of trying to be two different movies at once.  Sadly that cost it.