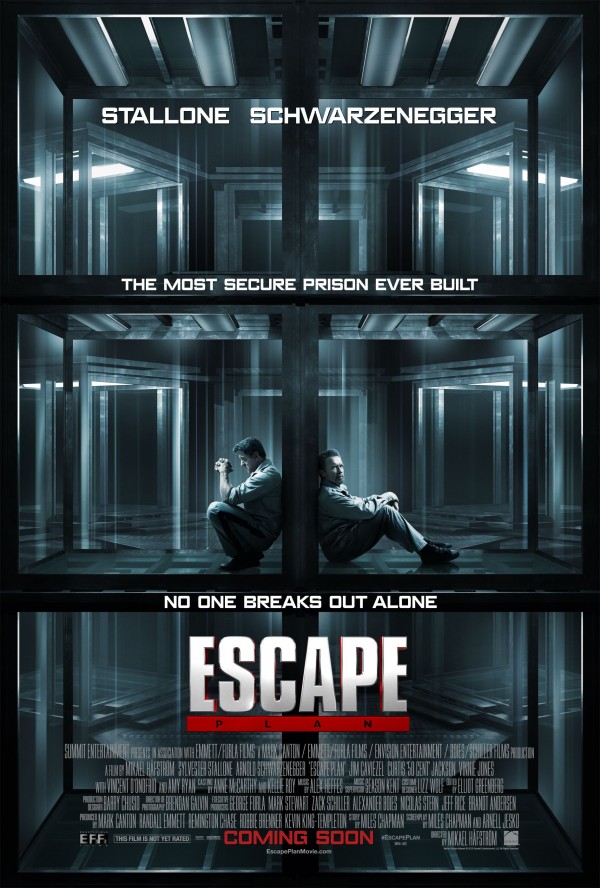 I never thought I’d see Sylvester Stallone build a sextant out of a paper plate, a pair of glasses, and some other unidentified garbage. I guess that’s one thing Escape Plan has going for it.

There’s little for me to write. I’ve had a hard time starting a review of this movie. I just don’t know where to begin or what to say. It wasn’t complete garbage but it really wasn’t good. I’d rather go watch The Expendables again, that movie was at least a blast to watch and was aware enough of itself that it was in on it’s own jokes. Escape Plan tried far too hard to be serious and realistic. Hell, I’d go watch Fortress  again before this. That movie at least knew it wasn’t reality and had fun with some sci-fi elements.

Basically the story is this: Stallone plays Ray Breslin, a prison specialist who has, quite literally, written the book on prison security the methods prisoners use to escape. He works for (maybe runs, it’s not quite clear) a company that is hired by prisons to test their security. They place Breslin in the prison, just like a normal inmate, then he works to break out. We see this happen once. Then a CIA agent enters and explains that they have this amazing new prison that they are keeping terrorists in, and they need someone to prove out their security.

Of course Breslin is in. Of course it’s not what it seems. When he’s “captured” he’s given a drug and beaten; in a helicopter ride to this mysterious prison he witnesses the guards murdering another man; once in the prison, he finds out he’s actually been abducted. Not long after he realizes things aren’t what they seem, he meets Arnold … I mean, he meets Rottmayer. He’s the ex-bodyguard for one of the most wanted men in the world, and he just won’t give up the location of his boss. Rottmayer has an immediate obsession with Breslin. It appears almost unhealthy.

Of course they escape in the end, though I won’t give away any details on how or who does. And of course there’s a twist. Of course, in the middle of all this, Breslin builds a sextant out of some garbage to find out where they are located in the world.

Of course I expected all this, but it just couldn’t overcome any of it. It tried to stay too close to the realm of possibility instead of going out on a limb with some extreme action or super crazy prison contraptions. It throws in a twist just for the sake of having a twist; the movie wasn’t served at all by it, other than it allowed Stallone and Schwarzenegger to star in a movie. Nothing was remarkable or memorable.

There’s a host of minor characters – a doctor played by Sam Neill, Breslin’s co-workers (50 Cent and Amy Ryan), a sadistic guard played by Vinnie Jones – that are sadly tossed to the sidelines when they could have really added something to the story. There’s a few scenes with Breslin’s co-workers trying to locate him, but they never do, and they don’t help in any way, and the scenes are just bad. They could have, they should have, but they didn’t. It’s just choppy and poorly done.